The African Heritage Institution (AfriHeritage), has made a strong case for gender equality and equity in order to ensure social, political and economic development in Nigeria and the African region. The Enugu based non-profit and independent think-tank made the case over the week when it hosted its popular public policy debate and engagement program – the Big Ideas Podium.

Delivering the keynote speech at the event titled: Gender Disparity and Underdevelopment in Nigeria, one of Nigeria’s renowned human rights advocate and frontline gender activist, Dr Joe Okei-Odumakin who is the President of Women Arise for Change Initiative, said adequate and conscious provision must be made to enable the woman to develop and contribute effectively to the overall development of the Nigerian society. According to her, “there must be provision of adequate opportunities for women to develop and contribute to national development and socio-economic growth”. She called on mothers and other family members to take adequate care in training the girl-child in order to liberate them from all forms of cultural, societal and socio-political marginalization.  “Education is the best form of empowerment that would not only bring economic freedom but also mental and cultural freedom for all women and every other person in society,’’ she said. 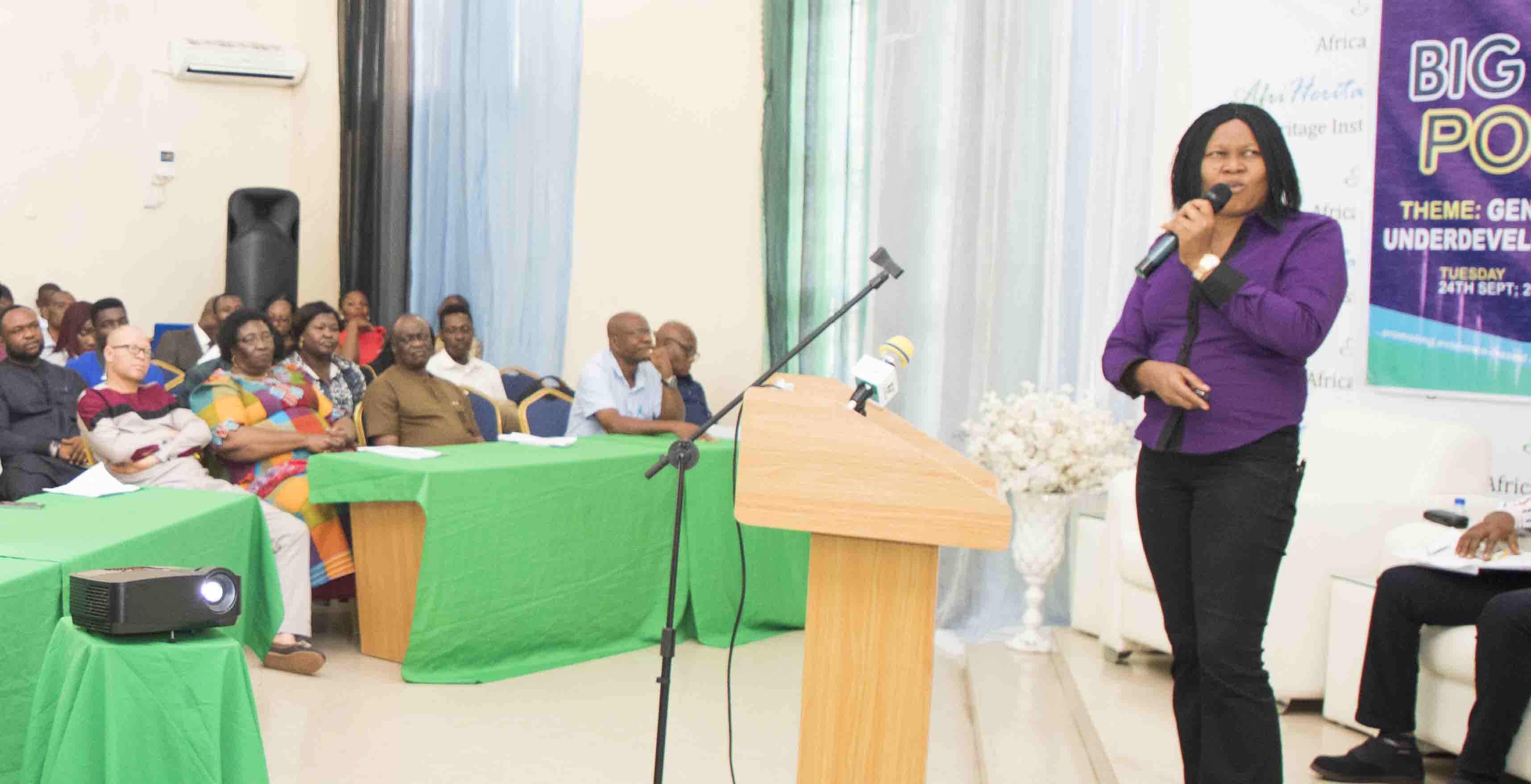 Dr. Okei-Odumakin decried the level of marginalization and lack of equal opportunity women are faced with in the Nigerian society particularly in the area of political governance. She lamented the present situation whereby there are only seven women in the 109-member senate and 11 women out of 360 members in the House of Representatives in the 9th National Assembly.  “This under representation and clear-cut marginalization cannot stand if only women come together and believe in themselves and use their overwhelming numerical strength to stand their ground”, she emphasizes. Dr. Joe Okei-Odumakin who is also the spokesperson of Coalition of Civil society Organizations in Nigeria however called for the establishment of a National Gender-Equity Commission in Nigeria, according to her, such a commission would serve as a regulatory body to monitor state and Federal Government’s compliance with gender commitments in the country.

One of the Paper discussants, Angela Gbanite, a retired permanent secretary in the ministry of gender affairs of the Enugu State government, called on women to enhance rise and claim their rightful place by improving on themselves and competing favourable in the scheme of things with their men folk. She posited that some of the challenges women are face d with at present will be surmounted if the women can change their orientation, see themselves as being capable of achieving their dreams if they get the right kind of education.

Earlier in his welcome remarks, the executive director of AfriHeritage, Prof Ufo Okeke-Uzodike, pointed out that Nigeria has been ranked one of the lowest countries in the world in the The latest edition of the Global Gender Gap Report by the World Economic Forum. The report, he states, measures the gaps between women and men across four crucial areas: health, education, economy and politics. According to him, Nigeria, which scored lower overall in 2018 GGG Report as compared to the 2017 Global Gender Gap Report, remains a very hostile place to live for the poor – particularly poor women and girls. He goes further to observe that overall, Nigeria ranks 133 globally out of 149 countries assessed for the 2018 report: 79 on “Economic Participation and Opportunity”; 140 on “Educational Attainment”; 132 on “Health and Survival”; and 139 on “Political Empowerment”. 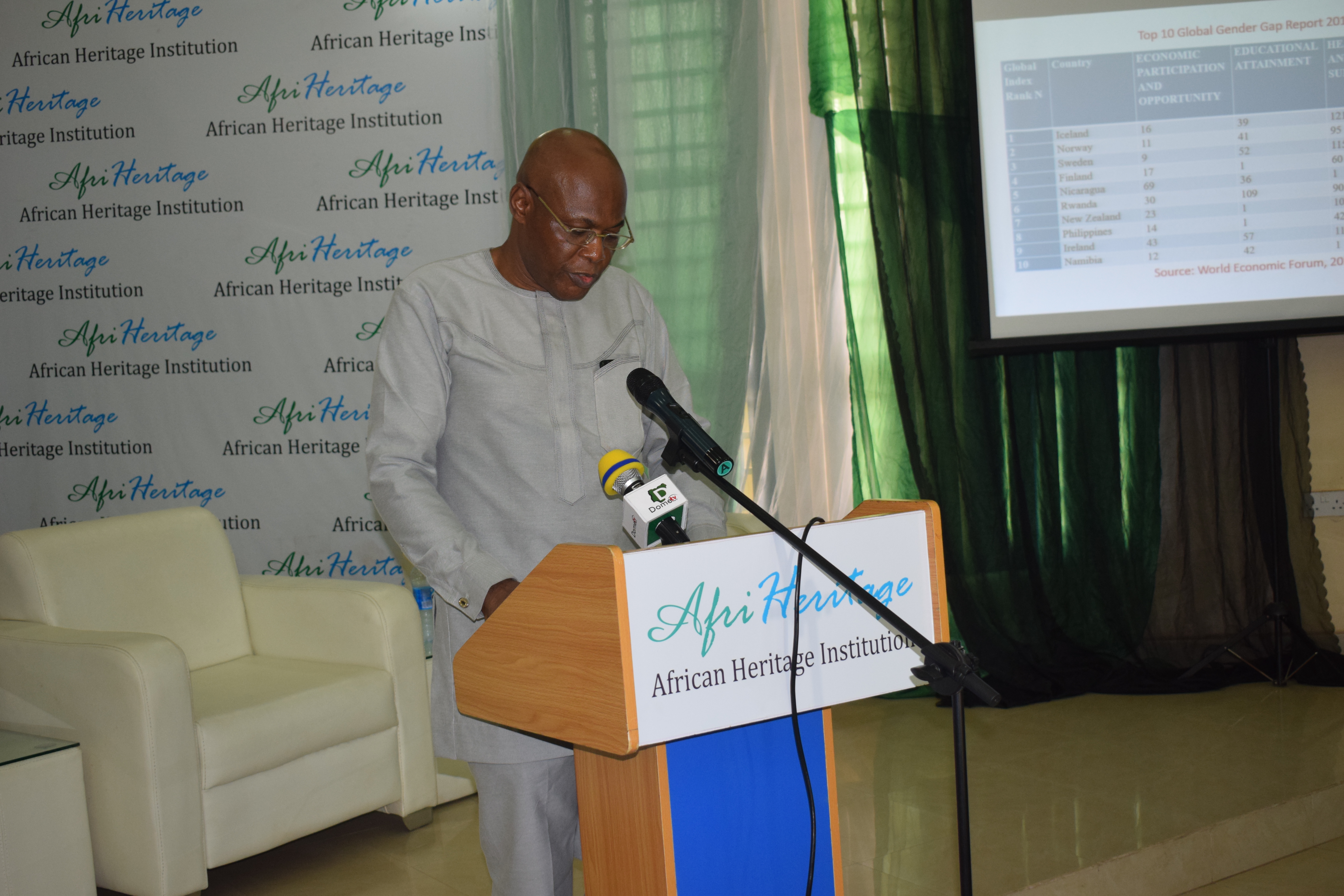 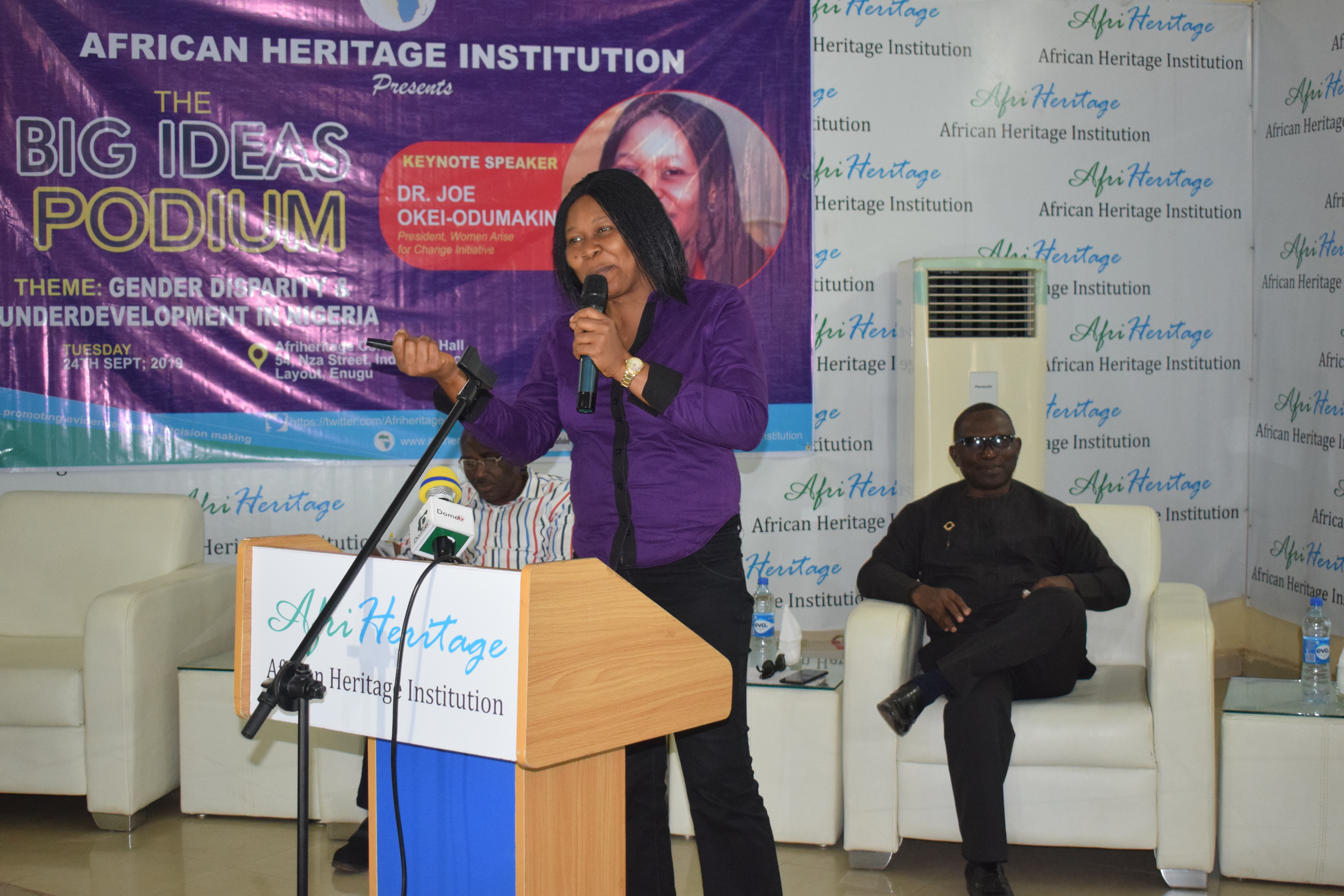 Professor Okeke-Uzodike who highlighted AfriHeritage’s sustained public engagement and advocacy activities on the issue of human rights and gender equality revealed that “given the lack of inclusion and the associated gaps in access and opportunities between males and females across Nigeria, AfriHeritage decided to make the issue the main focus of this edition of the Big Ideas Podium”.

The event which took place at the Institution’s Conference Hall in Enugu, witnessed a large turn-out of participants including people from the academia, the media, professional groups and other women organizations.

Resources from the Event